Even with signs of a cooling real estate market, Toronto is once again counting on housing prices to balance its $11-billion municipal operating budget.

The city’s top bureaucrat, city manager Peter Wallace, unveiled a preliminary 2018 budget on Thursday that will be debated and amended before a final vote in February. Unlike in many previous years, the proposed books are already balanced.

Mr. Wallace repeated his regular warning to councillors that in order to keep the finances in the black, Toronto is heavily relying on its land-transfer tax. His proposed budget projects that it will bring in more than $800-million in revenue in 2018 – despite a softening in the housing market.

While the budget plans include some buffer funds that could be moved around to ease a minor slip in revenue, Mr. Wallace said a dramatic decline could force the city to make sudden midyear service cuts. Any such cuts next year could happen awkwardly during the election campaign, which officially begins in May. (By law, Ontario municipalities cannot run operating deficits.)

The province’s new housing plan, which included a foreign-buyers tax aimed at discouraging speculators, has been credited with a sink in still-sky-high prices for homes in Toronto in recent months. New tighter federal mortgage rules next year are expected to have a cooling effect. But the city is still predicting that it will rake in $85-million more from the land-transfer tax in 2018 than it did this year. 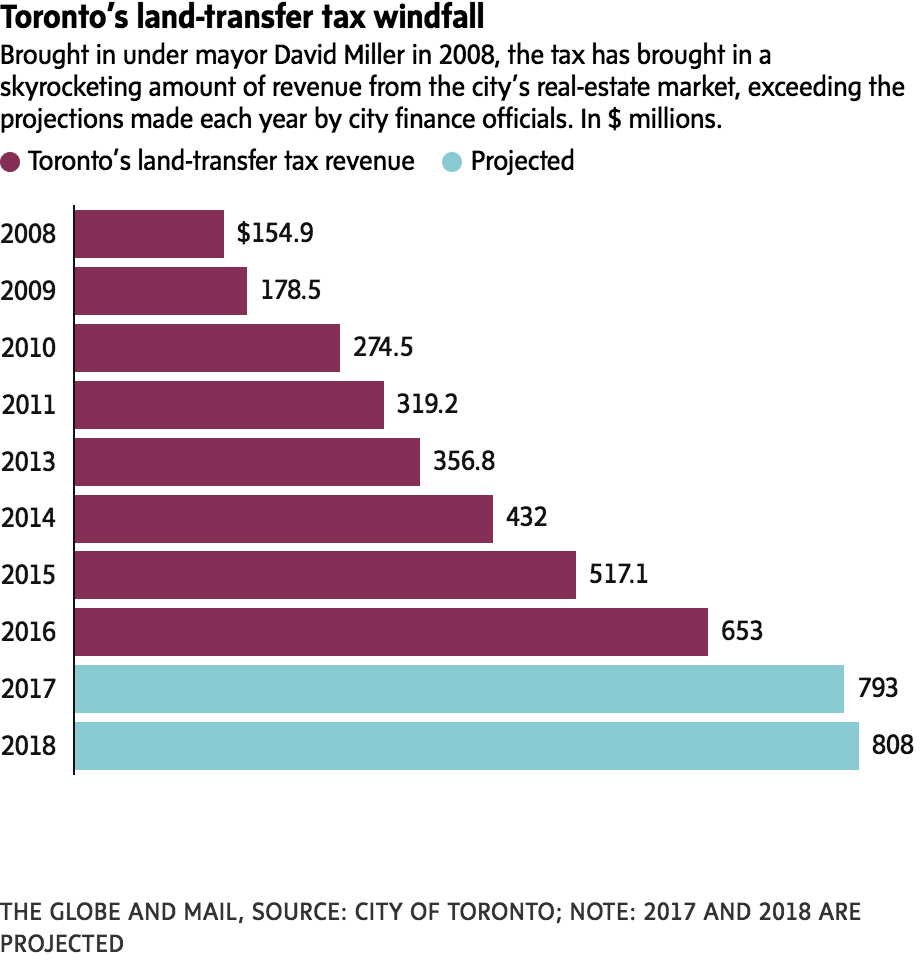 “For the fourth consecutive year, we’re gambling on the housing market,” said City Councillor Gord Perks (Ward 14 Parkdale-High Park). “And the bet we make every year gets bigger and bigger … and anyone who goes to a casino knows you can’t keep betting and hope to win every time.”

The mayor’s budget chief, City Councillor Gary Crawford (Ward 36 Scarborough Southwest), said he and city officials were watching the housing market closely: “I think the city manager is being prudent … They don’t see it going down. And even if it does, there is built in, a bit of a buffer.”

The land-transfer tax, brought in almost a decade ago by then-mayor David Miller, is producing more than four times the revenue it did when it launched in 2008. It’s a big reason that Mr. Tory has been able to keep his election promise to limit residential property-tax increases to the rate of inflation.

Mr. Wallace’s preliminary budget plan assumes an increase in the base residential property tax rate of 2.1 per cent, the rate of inflation. It has about $9-million left over for council to allocate as it chooses.

But a battle at city hall looms over what the proposed budget has left out: $41-million in spending on programs city council has already approved in principle, many of which the mayor has also said he will support.

Mr. Crawford said he believes a majority of the initiatives will be in the budget when it is finally voted on in February, pointing out that many similar programs originally left off the books last year ended up funded.

City Councillor Janet Davis (Ward 31 Beaches-East York) said it was wrong for city councillors to support such initiatives but then shy away from voting for property-tax increases to fund them properly.

“We talk about all these services we need, but we’re locked in because a budget gets produced based on some election promise for the mayor,” Ms. Davis said, pointing to city numbers showing that per capita, city spending has continued to decline despite a growing population and growing inequality.

Toronto city manager Peter Wallace on Thursday unveiled the city’s proposed 2018 budget, which will be debated and amended by council before final approval in February: